Menu
Covid -19 We are still open as we are an essential service. We are taking all necessary hygiene precautions to protect our customers and staff

How Storms Affect Your Roof

How Storms Affect Your Roof

Storms can be quite powerful and can greatly affect not only your roof, but also your home. When winds and rain pick up to cyclonic levels, your roof may be at severe risk of structural damage, posing a greater safety risk to you and your family. No matter what type of roof you have, be it metal or tile, there is a risk of a storm causing some damage.

Below we’ll discuss some of the effects that a storm can have on your risk, as well as some ways to prepare yourself and your home in the event of a storm to avoid larger costs in repair.

You May Lose the Roof During A Storm

It’s not impossible to have a storm actually rip the roof, or part of the roof, off a house, due to the sheer force of the winds. This is certainly not a common occurrence, as it is one that also depends on the current state of your roof to begin with. Is it in good condition? Is there any part of it that is already structurally weakened or aged?

Some Tiles May Come Off

It is definitely more of a common theme to find that some or many of the tiles of your roof have been ripped off with a big storm. This is more likely to happen if any of the tiles were installed incorrectly or if they had already been damaged. The good news is that this problem is usually easily fixable as you simply have to just replace the tiles. That is, unless you have a metal sheet roof, in which case the loss of tiles or even parts of the roof most likely wouldn’t happen.

Damage to the roof of your house during a storm can lead to bigger problems for you property. Sometimes you might just have an annoying leak, but it is not uncommon to feel as though the sky has opened up into your living room, causing a big mess and potential structural damage to the house itself.

Trees Cause Damage Too

Not only do you have to worry about wind and rain when it comes to a storm, but you should also be wary of the effect of a fallen tree. During a storm, if a dead tree snaps or is uprooted, it can crash into your house and cause serious damage to your roof.

Steps to Take before a Storm

If you know that there is a storm brewing, there are a few steps you can take to avoid more costly repairs.

AT THE END OF THE DAY, A METAL ROOF WILL STAND UP TO FAR MORE THAN A TILE ROOF. IF YOU LIVE IN AN AREA WHERE STORMS ARE A COMMON OCCURRENCE, GO FOR A METAL ROOF AND SAVE YOURSELF THE HASSLE IN THE LONG RUN. METAL ROOFING SYSTEMS ARE FAR MORE DURABLE AND THEY ARE BUILT TO BE HAIL AND IMPACT RESISTANT.

AROUND YOUR HOUSE, THE MAIN THING THAT YOU SHOULD BE CONCERNED WITH DURING A STORM IS THE TREES. START BY CUTTING BACK ANY BRANCHES THAT MAY BE LOOSE. IF YOU HAVE ANY DEAD TREES, NOW IS THE TIME TO CALL AN ARBORIST AND HAVE THEM CUT DOWN. FIND ANY LOOSE ITEMS IN YOUR FRONT YARD, LIKE LAWN FURNITURE AND CHILDREN’S TOYS AND BRING THEM INSIDE.

Make sure your gutters and downpipes are clean and ready to be of use when the storm approaches. You don’t want any rainwater backing up and adding weight to your roof.

One Stop Roofing Shop in Sydney is a local business that understands the effect that storms can have on roofs. To prepare yourself with the best roofing materials, come visit our showroom today. 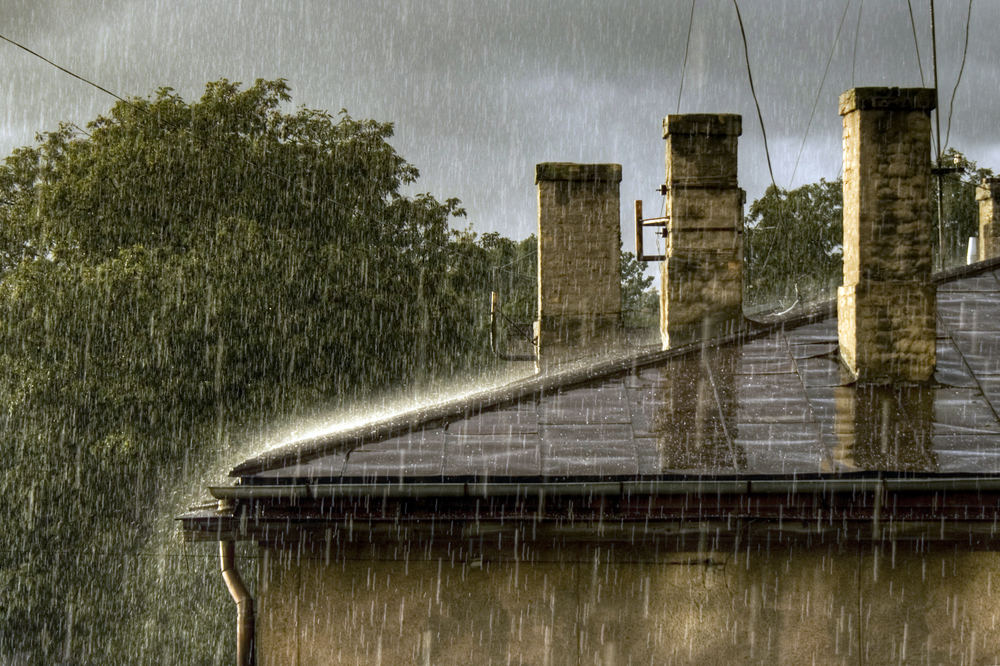 One Stop Roofing Shop Sydney - Residential, Commercial and Industrial
View our complete range of metal and tile roofing products online or visit our showroom in the Sutherland Shire today. For expert assistance and advice, talk to our experienced team today (02) 9540 2966
CONTACT US

Visit our Showroom to discuss your plans with our friendly staff. We can assist you with your selection and provide expert advice.
Facebook Instagram
ABN 95 060 335 882
QUICK LINKS
PRODUCTS
CONTACT
© 2022 All rights reserved, One Stop Roofing Shop
Contact Us Now
(02) 9540 2966